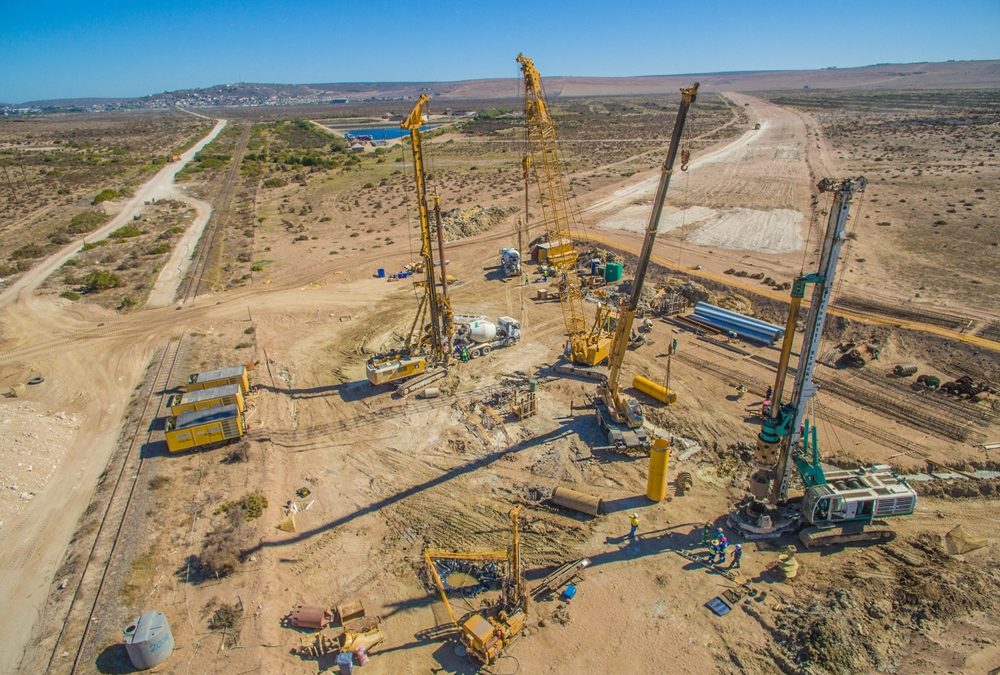 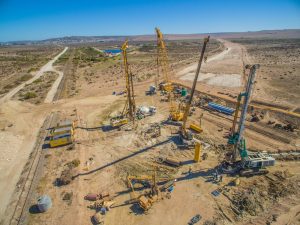 The piles were installed using some of the largest equipment in Stefanutti Stocks Geotechnical’s fleet, which can be seen here on site.

Stefanutti Stocks Geotechnical recently completed the contract for the construction of deep pile foundations to a road-over-rail bridge for client Power Construction on the 3,36-kilometre MR559 on the outskirts of Saldanha Bay.

Piling
The project entailed the construction of a total of 78 temporary cased piles (1 080mm diameter) up to a depth of 35 metres. The bridge’s two abutments (west and east) respectively required 34 and 36 piles, with a centre pier requiring eight piles.

Thirty-five of the overall total piles had a rake of 1:6. A further challenge to the project saw 36 of the piles with a 9.5 degree rake (1:6 rake) meaning that a 35-metre long pile deviated 5.8-metres away top to toe from the original pegged platform position to the vertical pile head. The setting out, drilling and concreting of these piles therefore required special skills, in order to meet the contract specifications and tolerances.

Drilling
The piles were installed using some of the largest equipment in Stefanutti Stocks Geotechnical’s fleet, specifically:
• A Leffer Hydraulic Oscillator BV1500HD coupled to a Bauer BG28 piling rig;
• A Casagrande 1500 Oscillator coupled to the Casagrande B250 piling rig; and
• A Kabelco 65ton crawler crane.

“The reason for utilising such powerful plant was due to the depth and geology of the piles,” says Marcin Szatkowski, Stefanutti Stocks Geotechnical’s site agent. Driving and extracting the casings, as well as drilling the stiff and cohesive clay is very difficult and time consuming.

“The machine on its own does not have the strength to drive and extract the casings,” explains Szatkowski, “and the oscillator assisted in this regard.”

Piling was undertaken from a level of eight metres above sea level, with the water table four metres below ground level. Although the site is located one kilometre from the sea, sea shells were being drilled out, indicating the movement of the coastline over time. In some locations along the coast the granite bedrock protrudes, indicating a natural upward slope of the bedrock.

The geology at the bridge location consisted mainly of the following; from zero to four metre Calcretes, four to 30-metre clays, and 30 to 35-metre granite bedrock. Although the calcrete was estimated at around 50MPa the machines easily drilled through this. The granite bedrock consisted of both soft rock and very hard rock. Stefanutti

Stocks Geotechnical purchased a new MHD Bauer Multi Hammer Drill system to assist with very hard rock socket drilling. “The MHD system increased our drilling production in the hard to very hard rock R4 and R5 classifications, making a huge difference, as we were required to drill 3,80m sockets in R4 to R5 granite,” says Szatkowski. Some of the R4 rock which was tested afterwards had a compressive strength of over 100 MPa and was subsequently reclassified as R5. Once the unconfined compressive strength of rock is over 70Mpa it is classified as R5 very hard rock. The MHD system uses a percussion drill bit with multiple hammers that break up the rock. It is a highly efficient system that was successfully used in the Chilean Mine rescue in 2010. The new asset will stand the Geotechnical division in good stead for future bridge projects of a similar nature.

Concreting
A total of 3 145m3 of concrete was placed with 233 tons of steel. The concreting was as per COLTO specifications for underwater pile placement, via a tremie system where piles are cast from the bottom up. The concrete is placed (via a tremie pipe) through the reinforcing cage to the bottom of the pile. This method pushes the concrete to the top of the pile, allowing any contaminant to be pushed to the top of the pile and eventually out at the top. “Although we had to implement a day and night shift at a certain stage of the project to meet our contractual obligation, the project was completed on time and in accordance to specification,” says Szatkowski. “Despite unforeseen challenges and the long working hours, we also maintained an excellent safety record and at the end of the project we provided our client with a quality product. Our commitment to the project deliverables laid a foundation for the development of a good working relationship with our client and the professional team.”