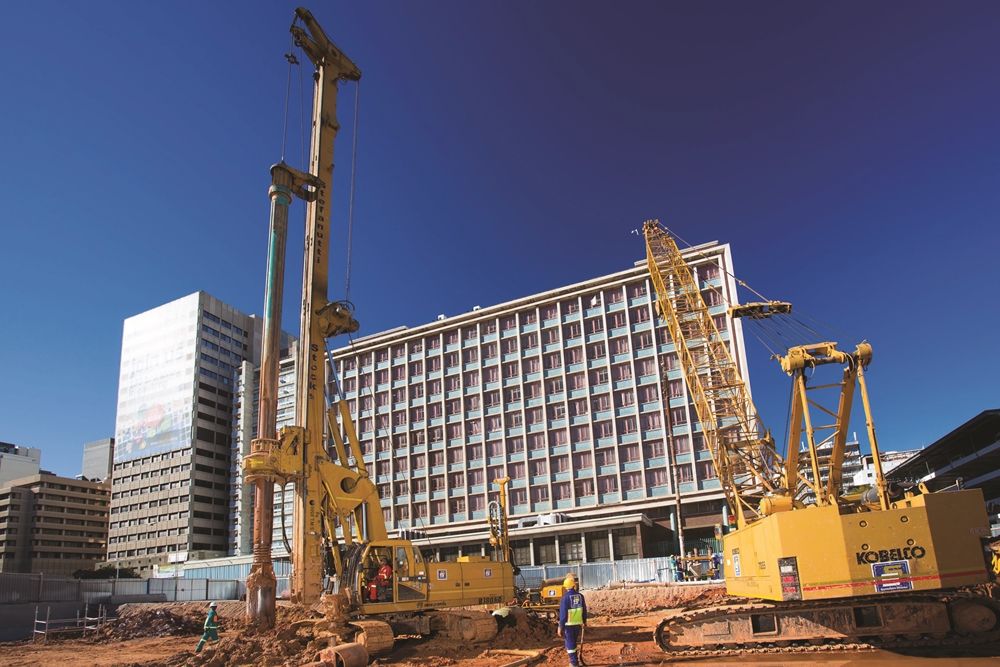 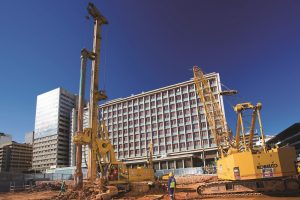 1. A Cassagrande B180 cleaning out the pile hole excavation with a cleaning bucket, and a Kobelco crane setting up the Tremie pipes to the right.
2. Lateral support works underway at the Kazerne transit-oriented development.
3. Continuous Flight Auger (CFA) concrete pumping in progress.

Stefanutti Stocks Geotechnical has successfully completed the foundations to the Kazerne Transit Oriented Development in Newtown, Johannesburg. The project comprised of bulk earthworks, permanent lateral support, structural piles and additional work in the form of a temporary traffic diversion for the bus lane on Harrison Street.

The initial five-month contract to complete the scope of works was extended by two-and-a-half months to accommodate the changes made to the original scope of works.

Mine sands were encountered below Harrison Street on the northeastern boundary of the site during the installation of the permanent lateral support. This resulted in severe soil collapses during the drilling for the anchors as well as the perimeter piles and necessitated a redesign for the anchors and piles in this section. Consequently, the perimeter piles were installed closer together and permanent casings were used in the free-length of the anchors.

During the structural piling the general soil profile encountered comprised of transported soils; a thick horizon of residual andesite; followed by very soft rock to hard rock andesite. These ranged from 16 to 27 metres below the natural ground level (NGL) with the water table at eight metres.

The Stefanutti Stocks Geotechnical design team carried out the analysis followed by the design of the most effective and suitable piling methodology for these soil conditions. Piles drilled under Polymer were identified as the preferred system and were mainly used on the large diameter piles that were installed to depths between 18 to 30 metres, to prevent side wall collapses.

During the early stages of the project early hard rock refusals were encountered at depths between 8 to 11 metres. As this was unexpected, the project team carried out further investigations in the form of core and percussion drilling to gather further geotechnical data on the area. “The additional investigation confirmed the hard rock refusals to be on andesite core stones,” explains project manager Teboho Motaung, “and ultimately we had to core drill through this hard rock core stones at penetration rates of between 0.08 to 0.1 metre/hour.”

The use of polymer eliminated the use of temporary casings and allowed Stefanutti Stocks to advance more effectively through the core stone horizon. A total of 440 piles were installed during the project, including 242 Continuous Flight Auger (CFA) piles varying from 450 to 750mm in diameter, installed up to 23 metres deep; and 133 polymer-technology drilled piles installed to depths between 18 to 30 metres.

The project management and professional team worked closely together to resolve any diffi culties encountered, ensuring that the project was completed successfully and within budget.

“I would like to thank the site team and management for making this project such a success,” says Motaung. “We would be delighted to secure further projects, such as this one in the future as it was certainly a highlight for the Geotechnical division this year.”

For more information on the technique, please view this article.